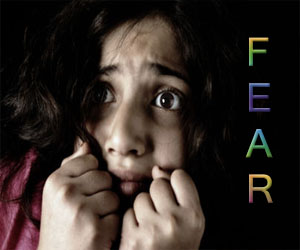 Fear is an emotion which is induced by a perceived threat of someone or something being dangerous. It is also believed to be a protective emotion that urges to either confront the danger or escape from it (fight-or- flight response) .But in severe or extreme cases, when we are in a horror, a freezing or paralyzing effect is also possible.

People often confuse the emotion anxiety with fear. But the basic difference between these two emotions is that anxiety is not associated with any immediate threat. Fear is often related to the future events like worsening of conditions or continuation of conditions that are unacceptable. Fear is often about some danger that may happen instantly.

It is found that people who associate with religious thoughts more often than others have least ‘fear of death’. When asked to give an explanation, they have said that they are convinced that there is an afterlife. But in general, every person without exception has more or less fear of death. ‘Fear of the unknown’ may be the fear of what might happen after 10 years or even the fear of tomorrow. Many people are scared even to take a decision in fear of what might lie in the near future.

But how is fear produced in response to a stimulus? It is the parts of the brain which play roles centrally and peripherally in the process of fear. Sensory cortex, thalamus, hypothalamus, amygdala and hippo-campus are the most important parts of the brain involved in the mechanism of fear centrally. Thalamus decides the location of sending the incoming sensory data. Sensory cortex interprets the sensory data. Hippo-campus stores memories and past experiences. It also processes a stimulus to establish relation between the memories and the context. Amygdala decode the emotions and determine an upcoming possible threat, and stores fear memories. Amygdala takes part most effectively in the mechanism of fear. Hypothalamus secretes hormones and activates the fight or flight response.

Fear is accompanied with physical responses like faster heartbeat, increase in blood pressure and increase in breathing rate. To keep the body cool, skin sweats. Sometimes fear is also associated with some sensations in the head, stomach, legs, chest or hands.

All of us have faced fear during the childhood. Children being young and vulnerable feel insecure in dark (they are afraid of imaginary scary creatures like monsters, with strangers, being alone. They are many-a-times afraid in a stormy night. But as they grow, develop and learn, and get continuous support of their guardians, fears like these are gradually overcome by them. But, in some exceptional cases children continue fearing imaginary creatures and are not able to overcome them by themselves. In such cases professional help and also support from the family, helps a lot.

One thought on “Psychology of Fear – Definition and Introduction”