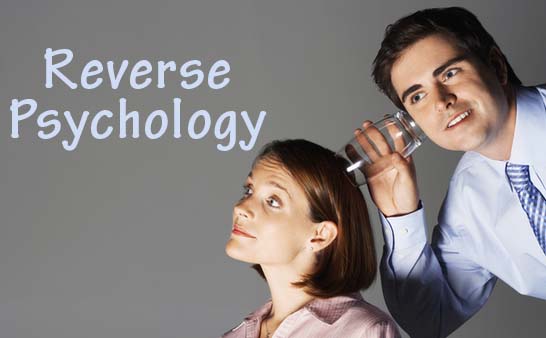 Reverse psychology in simple words may be defined as the encouraging an individual with a behavior which is contrary to the expected behavior with the notion that the individual would be motivated to perform the expected behavior. Basically it is like the advocacy of the contradictory of what is suggested.  It is primarily implemented on individuals who tend to dislike the aspect of persuasion and thus at the concerned point of time does the exact opposite of whatever is persuaded – hence going the other way round.

Reverse psychology plays a vital role in many stances – be it in the professional stance or the personal parlance, scientifically it has been proved that if carried out in the perfect manner, reverse psychology can prove to be very effective.

The most important thing on the forefront is the identification of the individual on whom the act of reverse psychology can be carried out. Scientific evidences prove that individuals with attributes like childish, bored, defiant etc can be advocated with the technique of reverse psychology easily. These attributes are mainly found in the children stage and also in case of adults, particularly in situations like when they have a pathetic day.

Say for example – there is a defiant child who keeps his room dirty. Now the mother can simply state that she hates the very fact that the room of his son is clean. Now a defiant child often possess an oppressive mood and in the very next moment he would start cleaning his room only just to offend his mother’s notion.

Using reverse psychology in children is relatively easy but when it comes to adult you need to be a bit more careful and most of all a bit more professional in your approach.

Consider the example of an automobile luxury brand. They generally promote their products in such a way that they provide a vibe to the economically weaker class with the message – “You people cannot have this”. Now this is what instigates quite a few people to achieve more and finally own a product of such a brand.

Many companies promote their products with a rarity message like “Only few stocks left”… this very message tends to provoke an individual with the notion that by any means he must be the owner of the last stock. It has played wonderfully well in the past and still plays quiet efficiently too.

Reverse psychology can also be incorporated in the very interesting and competitive aspect of bargaining. Once you let the seller know that you are keen for that product – your bargaining strength would literally fall. The very aspect of promoting your uninterested attitude towards the product would sort of instigate him to provide you with such a price that you would be bound to go for it.

Here is a video on How Reverse Psychology works:

Even the very aspect of jealousy plays a vital catalyst in reverse psychology. Flaunting a better cellular phone would have an envious factor playing on people which ultimately would lead to the promotion of that brand.

Thus reverse psychology if used in a proper way can be a highly effective tool to influence people.